Jaakko Seikkula: “During the psychotic crisis the patient is more open to sharing his feelings” 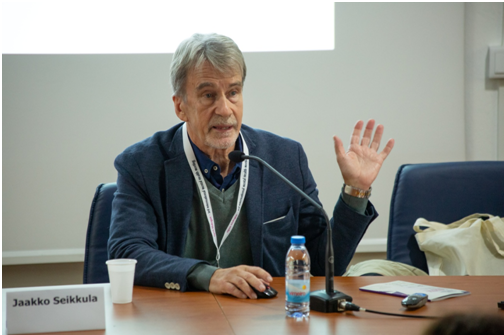 Jaakko Seikkula, professor of psychotherapy at the University of Jyväskylä, Finland, was a guest at the 3rd International Mental Health Meeting in Lisbon. The mentor of the Open Dialogue treatment system has shown to hundreds of participants that recovery is a reality, and that the steps to take are very simple (provided there is cooperation).

The need for revolutionary therapy emerged in Western Lapland, Finland, during the second half of the 20th century, when the region had one of the highest rates of schizophrenia in Europe. Nowadays this is no longer the case, and this change is due mainly to the method used to reverse this situation, the Open Dialogue.

What is the Open Dialogue?

“The Open Dialogue is a way of organizing psychiatric services with the aim of helping the patient during a crisis with utmost urgency, working together with the family and other parts of their social network,” explains Professor Jaakko Seikkula.

The Open Dialogue uses the social network that surrounds the patient, from family, friends, doctors, psychiatrists, social services or all those who can contribute and diagnose problems at an earlier stage.

“You should not insist on the symptoms or a specific solution, but try to understand what happened and what led the patient to a crisis,” continues Jaakko Seikkula.

The goal is to facilitate dialogue (internal and external) by mobilizing the patient to use his or her own resources.

Sometimes the best time to be helped may be during a crisis, at which point the patient may be more inclined to open up about his or her feelings.

“When the patient is more psychotic, more agitated, in 90% of cases it becomes more coherent during group meetings. And for me this is much more constructive because so the process of becoming coherent happens in a group rather than being in isolation, “said Seikkula.

This approach contributes to a more accurate assessment of the patient’s condition and allows one to choose a specific type of treatment that may or may not go through the medication.

“Psychotic problems are emotions that result in depression, anxiety, panic, among others. Mechanisms we all need if we are in stressful situations. It is at this point that we begin to create hallucinations in our mind to survive these stressful situations or something worse that has happened, “said the Finn.

Jaakko was also present in the debate that took place during the second part of the Meeting on Neoliberalism and Mental Health, and ended up answering some questions that had been suspended after his intervention.